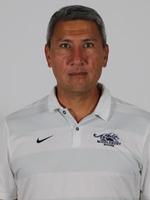 Kim enters his 14th season as head coach of the women’s soccer program at Middlebury. In that time, he has taken the team to seven NCAA Tournaments as well as appearing in the NESCAC Tournament in all 13 years. The Panthers have advanced to the NESCAC finals four times in his tenure, taking home the title in 2006 and 2013. Kim’s teams have advanced to the sectional round of the NCAA Tournament six times. Kim owns a career record of 151-56-26 over 13 seasons, with more than double the number of wins than any other coach in program history.

In the process he has coached 10 All-Americans, 29 All-Region players and seven Academic All-Americans. He has also seen several of his players earn All-NESCAC and All-NESCAC Academic honors.

The 2013 season was a historical one for the Panthers as they advanced to the NCAA final four. The team hosted and won an NCAA Regional and Section, setting a school record with 17 wins and a 20-game unbeaten streak. The Panthers also captured their third overall NESCAC Championship.

Kim joined the Middlebury staff in the fall of 2003 as the top assistant coach. He was involved with all aspects of the program including practice preparation, recruiting and scouting. He brings a wealth of knowledge and experience to the program holding both the USSF "A" License and NSCAA Premier Diploma, and over 20 years of coaching at the college, club, high school and youth levels.

He played college soccer at the University of Vermont from 1989-92. Later, he earned his master’s degree in Public Administration and was awarded the prestigious Marshall E. Dimock Award for Academic Excellence and Professional Leadership. He is also an Associate National Staff Member for the NSCAA and a Regional Staff Coach for the Region 1 Olympic Development Program. He continues to travel extensively in the name of soccer, studying player development systems around the world including Spain, Brazil, Chile, Argentina, and the Netherlands.

Kim has two decades of high level coaching and administrative experience and has been involved with several soccer organizations throughout the state. In 2001, he was honored with the "Outstanding Contributor to Youth Soccer" award by the Vermont Soccer Coaches Association. That year, he co-founded the Vermont Amateur Soccer League, to raise the level of adult play while developing a unique soccer mentoring program to connect adult and youth teams in the area.

Currently, he directs Capital Soccer, a soccer education organization in central Vermont, and is Director of Coaching and Player Development for the Capital Soccer Club.